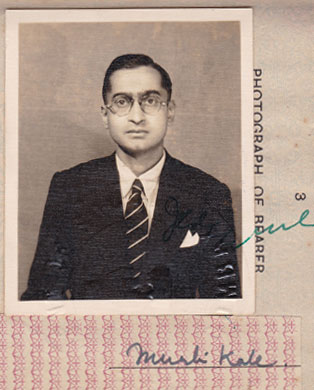 Kalemama’s son Murli (Murlidhar) alongwith his elder brother Shridhar or Babu were also Baba’s old Mandali and Murli a New Life Companion as well. Both brothers were with Meher Baba since the Prem Ashram boys days of 1927. Murli later qualified himself in homeopathy and looked after the Meherabad dispensary. He later joined Baba’s New Life. Murli endeared Meher Baba with his consistently exemplary behavior in conforming with the conditions of the New Life. After the New Life Murli was permitted by Meher Baba through New Life Circular No: 27, to settle at Jabalpur and practice Homeopathy.

Murli Kale and his elder brother Shreedhar were both amongst the fist 10 students of the Hazrat Babajan School at Meherabad in 1927 during the prem ashram days. He was also Baba’s New Life Companion. Murli later became a qualified Homeopath, and attended the Homeopathic dispensary at Meherabad Ashram, as a Doctor. He gave medicines to the mandli and the poor villagers. Later Murli accepted the conditions of New Life and joined New Life. Baba highly appreciated Murli for his implicit obedience and cheerfulness in adverse conditions of New life, as a Mandli and as a Companion. There are many humorous stories of his wit during the hardships of Ashram days, in various books and references on Meher Baba. Murli also wanted to go to England for higher studies in Homeopathy and his passport was issued with permanent address as Meherabad in 1952, which he but could not go as Baba, through a New Life Circular No: 27 permitted Murli to settle at Jabalpur and practice homeopathy, and Murli came to Jabalpur in 1952. At Jabalpur he started a Meher Charitable Dispensary, and a number of new Baba lovers came to know of Baba through him, and he was always a source of joy and inspiration for the Baba lovers. He often visited Baba during the darshan programms. He married Sulbha (Maiden name Miss Gangoo Mahashabde) and a son Niket was born to them. When the child was born, Murli sent a letter to Baba with thumb impression of child himself. Baba replied that it was for the first time, He was writing a letter to a child who was not even a year old, because it is for the first time He received a letter from a child not even a month old. Murli Kale passed away on 6th Feb 1977 at the age of 64 and became one with his Beloved Meher Baba. Later Murli’s son Niket Kale married Meera Pankhraj, one of Meher Baba’s very well known disciple Pankhraj’s daughter, and they still carry the torch of Meher Baba’s love …. and their two daughters Nikita and Amrita are well known amongst young Baba lovers ..

RAMCHANDRA BAPUJI KALE, popularly known to Baba’s Mandali as Kalemama, was born on 12th February 1877, in a fairly well-to-do Brahmin family of Kolhapur. His father was a Head Clerk in the Khasgi Kacheri (Personal Office) of His Highness the Maharaja of Kolhapur. After graduation in Engineering in the year 1903 from Poona Science College (now known as the College of Engineering), Kalemama settled down in life and plied his engineering profession in Bombay Presidency in very many capacities—official and private. Kalemama first came into contact with Meher Baba in May 1926, when he was in service as Chief Officer to the Dhulia City Municipality (West Khandesh). Although believing in saints and saintliness, Kalemama never bestirred himself to have the Darshan of any living saint and the few places of pilgrimage he happened to visit, had no avowed spiritual object behind them.

It was therefore a chance circumstance, that he received a call from a relation to see him at Arangaon (Meherabad) where he (the relation) was staying with Meher Baba for some private and important business of his own. A few months prior to this invitation, in the month of February 1926, Kalemama happened to receive a pamphlet in Marathi styled as “Satsamagam” and it contained among others a short account of Shri Meher Baba and his activities for the spiritual uplift of humanity at Arangaon (Ahmednagar Dist.). In the said pamphlet the author had quoted the words of Shri Meher Baba saying, “To serve man is to serve God.” The basic truth—universally acknowledged and sung—underlying the words of Meher Baba, found and touched a sympathetic chord in the heart strings of Kalemama—bespeaking the spiritual bent of mind that he had though unexpressed.

Thus the invitation of his relation for him to go over to Meherabad in May 1926 was eagerly availed of and he considered it to be a God-sent opportunity to have Meher Baba’s Darshan as well. Kalemama was allowed to stay at Meherabad for two days and what looked like a chance meeting and Darshan of Shri Meher Baba for him, proved to have a far-reaching effect on the future trend and career of his life. Hereafter he felt within himself an unspeakable urge and longing to see Meher Baba as often as possible, and he therefore availed himself of all holidays and weekends to run down to Arangaon from Dhulia where at the time he was functioning as Chief Officer to the Municipality. This ingrowing desire to have the benefit of Meher Baba’s ‘Sahavas’ (company) and to participate in his noble cause of service to humanity,found its fulfilment in the year 1930 when he retired from service.

Accordingly he went over to Meherabad and stayed with his wife there with a separate establishment of his own. After the demise of his wife in 1934*, he became a permanent inmate of Meher Baba’s Ashram at Meherabad, and he is there along with others since then. Besides the life of austerity and self-denial obtaining at the Ashram, Kalemama in spite of his age, has proved himself immensely useful in his professional capacity as engineer for buildings and other constructional works at Meherabad and Bangalore which fact has been greatly appreciated by the Master. To-day he is at Meherabad ever eager and ready to serve the cause of the Master in loving co-operation with the other Mandali members who own regards and respect for the seniority of his age, his genial temperament and his love for the Master.

Note: Kalemama died in Meherabad Ashram on 16th Sep 1954. This above article was published in Journals in 1941 which is reproduced for reference.

*[Mrs. Kalemama (Janki) came to Meherabad ashram with Kalemama after 1929 and became a part of the residents staying in Family quarters until she suffered from heart ailment and died on 14th March 1934 early morning at 3.30 am. Baba went to the Family Quarters to see her on Tuesday, 13 March 1934. She felt so happy at seeing Baba that she forgot her pain. Baba assured her, “You will be freed tomorrow. Do not worry.” Her cremation was done at Meherabad. After the death of his wife, Kalemama moved to the men mandali’s quarters and lived there the rest of his life until 16th Sep 1954 when he also died, and cremated at lower Meherabad. ] Her name was included in the list of dear departed ones by Baba, alongwith her daughter Chingutai (Mrs. Manorama w/o Rasaheb Pandit]

During November 1929, Baba went to the Pandu Lena Caves several times and once visited Gangapur Falls. On Saturday, 30 November, Kalemama came to Nasik with his wife Janki and his elder brother Krishna Rao “Annasaheb” Kale. Baba personally looked after them and ordered the best arrangements for their stay, for these three individuals were soon to become permanent members of his mandali.
[Lord Meher Page – 1124]

During this same period, Kalemama’s wife Janki was seriously ill with heart trouble. Baba went to the Family Quarters to see her on Tuesday, 13 March 1934. She felt so happy at seeing Baba that she forgot her pain. Baba assured her, “You will be freed tomorrow. Do not worry.” The woman expired at 3:30 A.M. that night and was freed forever by the God-Man. After the death of his wife, Kalemama moved to the men mandali’s quarters and lived there the rest of his life.
[Lord Meher Page – 1592]

Kalemama (Ramchandra Bapuji Kale or R. B. Kale – was commonly knows as Kalemama in Meher Baba’s circle) was Meher Baba’s close companion and one of the earliest Mandali, since 1926. A Civil Engineer by Profession graduated in 1903 from then Poona Science college, Kalemama held a number of responsible positions in Maharastra Govt services, as Chief Executive Officer of Kolhapur Municipal Corporation, Estate Engineer at Ballarshah, and Chief Officer of Dhule Municipal Corporation etc. Kalemama was one of those disciples of Baba who also had the rare opportunity to meet Shri Sai Baba, Shri Upasni Maharaj and Shri Narayan Maharaj, a number of times. The Wedding of one of Shri Sai Baba’s very well known disciple Mr. Bhate’s daughter was proposed with Kalemama’s elder brother Anna Kale. Shri Sai Baba called the families to Shirdi, and Kalemama spent his Winter holidays at the Shirdi Ashram in 1910. Kalemama along with Mrs. Kalemama and Murli came to settle at Meherabad Ashram after accepting Meher Baba as their spiritual guide. Kalemama being a civil engineer supervised a number of construction activities at Maherabad. Mrs. Kalemama passed away at Meherabad on 14th March 1934 at 3.30 am early morning and Kalemama on 16 Sep,1954.

Kalemama also had the rarest opportunity to meet the living Sadguru’s Shri Sai Baba of Shirdi, Sadguru Shri Upasni Maharaj of Sakori and Sadguru Shri Narayan Maharaj of Kedgaon-Bet. It was during 1939 while he was at his daughter’s place in Panchgani, who was married to Shri Raosaheb Pandit founder Principal of the well known “Sanjeevani Vidhyalaya” of Panchgani, Kalemama wrote his memoirs of his meeting with the Perfect Masters. The Rare Scanned images of Kalemama’s original Diary in his own handwriting mentioning these privileged meetings with the Perfect Masters and Meher Baba are available in this section of our Web Site for general information and record. 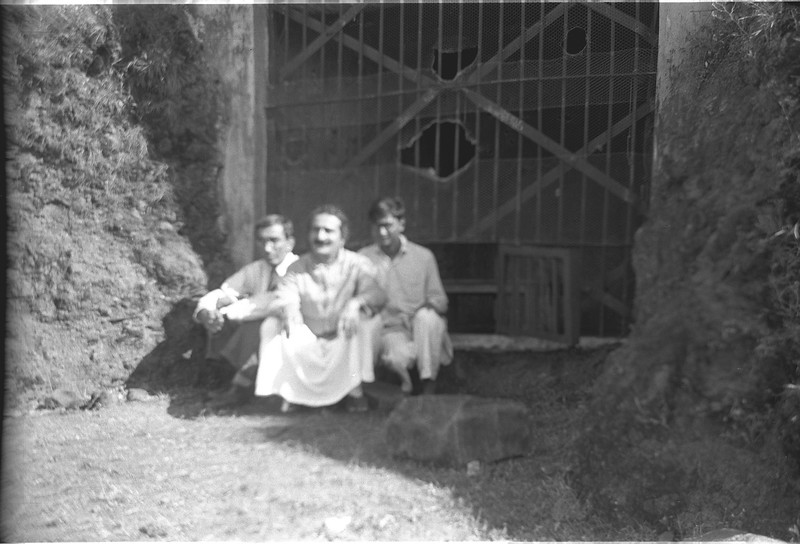 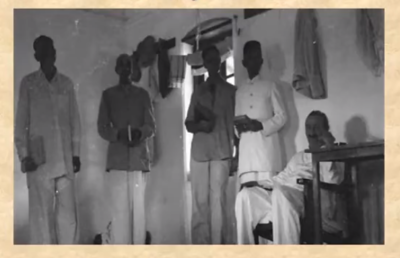 Kalemama with Meher Baba as one of the priest , reading geeta

When the meeting was over, Baba turned to Murli and praised him very highly with all the dignity and solemnity at his command for his deal consistent and exemplary behaviour in conformity with the conditions of the New Life of six months old. His consistent cheerful and jolly mood was the bright spot for the companions through all the ups and downs and other trying vicissitudes of the New Life. In the presence of all, Baba folded his hands to him as a salaam in recognition of his bravery and brilliant merits. There was no divided opinion about this among the companions. He has endeared himself to all including Baba. Afterwards Baba left the cottage at 11 a.m.