The Wayfarers – By Dr. William Donkin
[About Meher Baba and Hist mast contact and work] 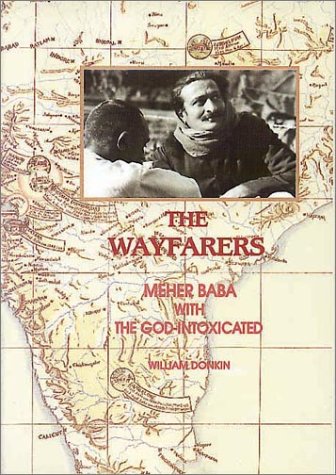 Please download a free PDF copy of the Book

Who is a Mast? – According to Meher Baba

Masts are God-intoxicated souls. They are intoxicated by Divine Love. Their external behaviour often is like that of an insane or mad person. The glimpses of divinity that they get are accompanied by a joy that breaks through any type of sordid composure. One state of unbalanced exaltation is replaced by another state of unbalanced exaltation. A mast may be on any plane of consciousness. Some masts get stuck on the inner planes. They are over powered by the onflow of grace and love, and get into a state of divine stupor. They are entirely absorbed in the “beautific vision.”

The principal sensation of a mast is this permanent enjoyment of divine intoxication. The creation is full of bliss and the mast enjoys this bliss and thereby becomes intoxicated to an almost unlimited extent, virtually consuming him and absorbing him and thereby making the world around him vanish. Absorbed in God, such a person is continually absorbed in thinking about God, and with that comes like a bolt of pure love consuming him further in a state of divine intoxication.

Masts do not suffer from what may be called a disease. They are in a state of mental disorder because their minds are overcome by such intense spiritual energies that are far too much for them, forcing them to lose contact with the world, shed normal human habits and customs, and civilized society and live in a state of spiritual splendour but physical squalor.

How does it happen that some men and women become masts?

Baba, by His contact with masts, gives effective guidance and a spiritual push. He initiates masts into a greater clarity and lucidity of consciousness, into a deeper ecstasy, a purer and more expansive love, and into a truer stronger creativity of response. Baba draws them out of the “self-sufficiency state” of being absorbed in the Divine Love to a state of rendering true service to others who are in need of spiritual help. A mast can therefore be a more effective agent for spiritual work than the most able persons of the gross world. The mast mind is also often used directly by Baba as medium for sending his spiritual help to different parts of the world.

“Meher Baba has explained that the majority of masts are to be found in India*, which is the most important country in the world from the spiritual point of view. Apart from those in India, there are a few masts in Arabia, a very few in parts of Iran (these few are mostly in Meshed and Tabriz), and a very few in Egypt, China and Tibet. As far as countries outside Asia are concerned, there are, with the exception of Egypt, no masts in any other part of the world. There are, however, God-lovers, a few advanced souls, and certain people who are Agents of the Saheb-e-Zaman (Avatar).”