Sai Baba of Shirdi was one of the Self realized souls of our time. Meher Baba called Him Qutub-i-Irshad, or the First amongst the Masters. A Perfect one is always beyond the finite barriers of religion. The consciousness of the Self is perfectly beyond any notion of caste, creed or religion. Even if it is still a matter of discovery if Sai Baba was born a Muslim or a Hindu, it hardly matters for the spiritual status He enjoyed.

As per certain belief Sai Baba was born in 1839 in Sailu village in Jintur district. There is however another belief that He was born in Pathri Village of Parbhani District. But it is learnt that much of His childhood was spent in Aurangabad. Sai Baba was also born a Fakir. His childhood was full of hardships, and it is perhaps these difficult days that gave Him his immensely compassionate nature as a Perfect Master.

While wandering from place to place with His mother, the child Sai came in contact with Gopal Rao Deshmukh, a blind Saint in the village of Shelwadi. This Saint saw the child with his inner eye and immediately recognized the Divine in Sai Baba. Sai Baba began living with Gopal Rao Deshmukh and also had to face opposition from the disciples of Deshmukh.

After Gopal Rao died, Sai Baba started His search for a more peaceful place and went towards the hills surrounding the Ellora caves. He chose a small cave atop a hill and remained there for a few years. Sai Baba had become a God- Realized soul at the tender age of hardly twenty years. Meher Baba in His book “God Speaks” explained that once a soul attains Realization his entire consciousness of duality is lost. He experiences nothing but Himself as everything. But only those who simultaneously gain both the consciousnesses of “Adwait” and “Dwait” or Divine unity and duality are in the state of a Sadguru or a Perfect Master.

During this period Sai Baba met The Swami of Akalkote. Moving from place to place He came to the hill called Kuldabad, near the tomb of the Muslim Qutub Zarzari Baksh. Gradually, in this cave near Ellora, Sai Baba regained His “Dwait” or duality state. Although He was about five feet six inches tall, and had a very strong build, He became very weak and almost like a skeleton during this process in isolation. Meher Baba has explained the real stages of development of consciousness of a pilgrim on the spiritual path as a hierarchy:-

A Perfect Master or Qutub, according to “God Speaks”, is at Baqa-Billah or the highest point of Divine consciousness, and is one with God. He is on all levels of consciousness simultaneously. He transcends the Cycle of repeated lives. After losing His individuality and merging with the Oneness of the Infinite Divinity, He again attains duality consciousness, and works for the evolution of humanity and for those who surrender to Him. 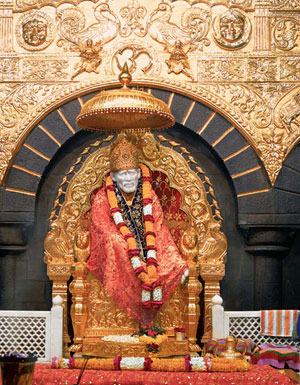 After some time Sadguru Shri Sai Baba came back to Shirdi in 1858. This time He made Shirdi His permanent place of residence. It is said that Chand Patil saw Sai Baba under a mango tree as a Fakir near the village of Dhoop in the district of Aurangabad. Then Sai Baba had a cap on His head. He wore Kafni and was fond of smoking Chilim (a pipe). Sai Baba helped Patil to find his lost horses, and Patil brought Sai Baba once again to Shirdi in his bullock cart.

The cart halted near the Khandoba temple, where Sai Baba met His first disciple Bhagat Mahalsapathi. Later Bayaji Bai, the mother of Tatya Kote Patil, was attracted by the grace of Baba. She used to prepare bread and vegetables for Baba every day. There was also a mosque at Shirdi, which was a temporary structure at that time (1858). Sai Baba named this mosque as “Dwarkamai” mosque and started staying there.

Sai Baba would beg for “Bhakri” bread from the houses of Shirdi, and lovingly ate the bread with “kanda” — the word for onions in the Marathi language. Any excess food received through begging was distributed to the poor each day. Sai Baba was a true Fakir. His life was a complete symbol of selfless purity. Gradually the stories spread of many miracles that happened by His grace, and a large following gathered around Him. Once when the entire village of Shirdi was suffering from plague, Sai Baba is said to have averted the epidemic. But Sai Baba always lived the life of a Fakir. He made a brick His pillow, and a stone seat His “Asana”. His needs were almost none.

Some of His personal habits were peculiar. He would prefer to go to ease His bowels in a procession, called “Lendi procession”. Large numbers of His followers would go with Him in the procession. But, His state of immersion in God made Him so innocent that it is said once He asked the mother of a child “Is this child of yours a boy or a girl?” although the child was standing naked in front of Him.

The most important thing in His divine personality that attracted all was the light in His eyes. The divine Bliss of becoming one with God emerged through His eyes. These two lustrous objects in His body were the source of inspiration, care, mercy and “Mukti” for all those who surrendered to Him. Everyone who came to Him for a wish heard his famous words “Allah Malik Hai”. Sai Baba was a peculiar person indeed. He dressed like a Muslim, but used caste marks on His forehead like a Hindu. He quoted the Koran and the Shastras equally. He stayed in a Mosque but also permitted Arti and Puja to be performed before Him.

One of His special habits was to ask for “Dakshina” from the pilgrims who visited Him. Willingly every one gave Him the money that He sought, which He ultimately used for the poor. On one such occasion one Kashinath came to Him and Baba asked for money and Kashinath gave Him a black coin. Sai Baba said somewhat to Him “although you have given me the black coin, I will give you the real coin”. This Kashinath later became Sadguru Upasni Maharaj, with Sai Baba’s grace.

By this time, Shri Upasni Maharaj was staying and fasting at the temple of Khandoba, near Shirdi; while in Pune Merwan Sheriar Irani, a Deccan College student born in a Parsi family, met Hazrat Babajan, during 1913, while he was hardly 19 years old. Hazrat Babajan called Merwan towards Her and kissed Merwan on the forehead. Merwan instantaneously lost all his gross experience and merged in God Consciousness. He remained in this state of no understanding of physical worlds, for months together. On an impulse,Merwan went to Shirdi to meet the Sai, and get His blessings.

Merwan visited Shirdi with a companion Khodu. On knowing that Merwan had come, Sai Baba first avoided meeting him, but while Sai Baba was coming back from His “lendi” procession, Merwan prostrated before Him. Sai Baba saw Merwan and uttered “Parvardigar”. Sai Baba directed Merwan to Shri Upasni Maharaj who was observing a long fast in the Khandoba temple near Shirdi, and Merwan stayed with Maharaj for a long time. With the grace of the Masters Merwan discovered His real Self and later became Meher Baba, and worked for upliftment of the lepers and the poor, traveled the world and gave the world the key to the theory of evolution of the consciousness and species in His valuable books.

The spiritual journey according to “God Speaks” is divided in to seven stages of inner evolution also called the planes of consciousness. The lower planes are full of miracles while the seventh or the Highest plane is of God Realization, where one becomes one with God. Such realized Souls are of immense spiritual benefit. From among the God-realized, some souls become Perfect Masters and return to help other souls reach God realization.

Meher Baba explained the philosophy of creation simultaneously in three principal schools of thought: Sufi, Mystic and Vedantic. He unified the terms of these three basic schools and their common references in a parallel manner. He always warned his devotees to keep away from miracle-based spirituality, and clearly described that the real miracle is the realization of the Self, and all other miracles were just eyewash.

By 1918 Sai Baba was nearly 80 years old. Now He was very well known, everywhere, and top government officials and persons from the judicial services of Maharashtra and some prominent Lawyers had begun regularly coming to Him. Some of them also had resigned their worldly duties in order to stay at Shirdi and serve Him better. The many miracles associated with His personality were drawing a very large number of devotees from all corners of the country, but the real miracle a Perfect One does is to make someone like Him, and He made Sadguru Upasni Maharaj like Him. Sai Baba also had some extraordinary qualities. He was able to separate his limbs and organs from the core of His physical body. But the body is tied to the knot of mortality, while the consciousness is free. On 28th September 1918, Sai Baba fell sick with fever, and later He voluntarily refused to accept food. For nearly 17 days He was without food and on October 15th, 1918, with God’s name on His lips, He dropped His physical form.

His physical body was kept at Shirdi in a “Samadhi”. Sadguru Upasni Maharaj and other close disciples personally looked after the final rites of Sai Baba. The “Samadhi” became a source of Knowledge and Bliss in due course of time, and the story of an unknown Fakir became one of the most widely read and discussed events of our time.

Such a Perfect Master’s place is Shirdi. This small place in Ahmednagar District of Maharashtra is easily approachable from Manmad, which is a very prominent Railway junction. All major trains to Bombay and Pune go via Manmad. A taxi or a Bus can be obtained from Manmad or Kopargaon Railway Stations, to reach Shirdi, the resting place of the Qutub-i-Irshad, Sai Baba. Pilgrims have ample facilities in which to stay and food is available at Shirdi. People come for darshan all year round. Kalemama, who was Chief Executive Officer of Kolhapur Municipal Corporation, and also occupied various other important offices, personally met Sai Baba in Shirdi. You may read this incident of his meeting with Sai Baba in 1910 and 1911, in his own handwriting in Marathi . Later Kalemama devoted his life to Meher Baba.

The “Samadhi” of Sadguru Upasni Maharaj is near Shirdi at Sakori, and Meher Baba’s “Samadhi” is also just 80 km from Shirdi on the Shirdi – Ahmednagar Road. All these are becoming places of world pilgrimage, and pilgrims visiting Shirdi would be well advised to visit them.

A translated version of Rumi which we read somewhere tells the story of a real dervish or Fakir:-

The Sufi opens his hands to the Universe
and gives away each instant, free.
Unlike someone who begs on the street for money to survive
a dervish begs to give you his life.