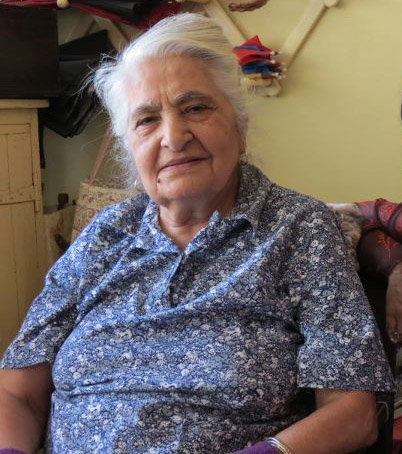 We wish to inform the community that Baba’s dear Meheru will be interred at Upper Meherabad beside the Samadhi on 20th May 2012, the anniversary of dearest Mehera’s reunion with her Beloved. he exact time has not yet been determined but we will keep you informed as soon as the decision has been made.

In Baba’s Love and Service,

Avatar Meher Baba gathered His dearest Meheru into His loving embrace on April 21st, 2012 at 4:06 p.m. in Meherazad. Meheru went to her Beloved due to a stroke; she was 84 years old. The cremation will be at Meherabad on April 22nd, 2012 at 9:30 a.m. Her ashes will be interred on Meherabad Hill by the side of Meher Baba’s Samadhi as He directed.

Meheru had the great fortune to be born to two of Meher Baba’s very close disciples from His earliest ashram days, Rustom and Freny Irani, Freny being Mehera’s sister. From her early childhood, Meheru longed to be a part of Baba’s ashram, and as soon as she finished schooling in her mid-teens, Baba accepted her as one of His intimate women mandali. Immediately she dedicated her life to serving her two beloveds, Baba and His dearest Mehera. Meheru’s lively, spirited, active nature was combined with a deep sensitivity and grace that served her well as one of Mehera’s closest companions, especially after Beloved Baba dropped His body. She was the last remaining of Baba’s New Life companions, the last of those with Baba in His 1952 car accident in the West, and also the last of the Meherazad resident women mandali from Baba’s time.

After Mehera rejoined Baba, Meheru continued to care for Baba’s Home and His personal things in the way Mehera would wish, both at Meherazad and through her guidance of the Trust’s archive team. She also continued to welcome Baba-lovers to Mehera’s porch with warmth, treats, witty remarks, games, and most of all, touching memories of a life spent with the God-Man and His beloved.

Meheru’s lifelong courage, sacrifice, unswerving focus, and whole-hearted dedication is a tribute to her Beloved, and an example to all His lovers now and to come.

We, your Meherazad family, salute you, dearest Meheru, for your life of complete surrender and service to the Avatar of the Age.