This structure did not exist when Baba first came to Meherazad. What we know today as Mandali Hall began as a garage to house two cars given to Baba by Elizabeth Patterson.

Originally, there was only a dirt floor and makeshift bamboo matting for walls. After the cars were disposed of, it later evolved into a stable for Mehera’s pet horse Sheba. At that time, mud brick walls were created to make a sort of stable for the horse. There were no windows and there was no front door, only the back gate. In the corner of the stable was a soap-box used by the groom and hay covered the floor. When the horse was eventually given away to the Military, the stable was empty.

In a very real sense, the Avatar’s ‘Office’ remains open to this day for those who are drawn to imbibe the atmosphere Baba created there for His work. 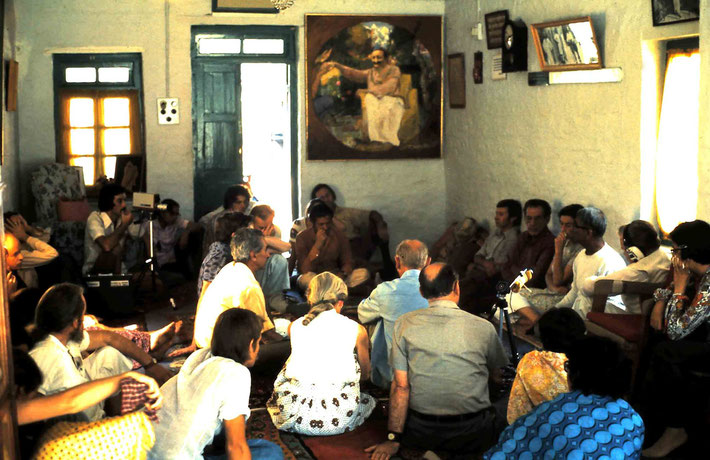 After Meher Baba dropped His physical body the Mandali Hall became a regular Place for Pilgrims to come and sit with the Meher Baba’s intimate Mandali (close disciples) like Eruch, Mani, Bal Natu, Aloba, Pendu and others and listen to the wonderful stories of their life and time with their Beloved Meher Baba.

MandaliHall.org is a non-profit library of over 1800 audio recordings including talks, discussions, stories, samadhi tunes and musical performances by Meher Baba’s mandali and other lovers. MandaliHall.org is a website with Audio/Video Clips of Meher Baba’s intimate Mandali or close disciples who spent their life with Baba. In the Meherazad Mandali Hall they were always happy to share their wonderful inspiring stories with the visitors, which have been recorded from time to time and uploaded on the MandaliHall.org website, includes songs, bhajans, prayers and aarties, plays and performances etc