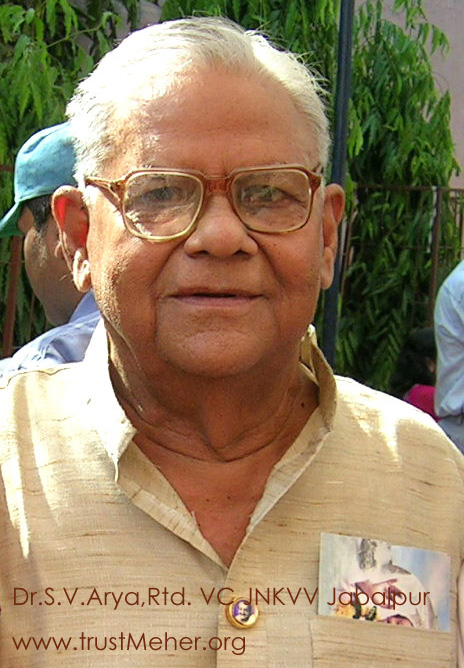 Arya heard of Baba’s name through Mr. M. Appalnaidu, who gave him “God Speaks” to read. Prof. Arya used to say with great emphasis that, there is no other book in the world that explains metaphysics so beautifully. “God Speaks” and “Discourses”, jointly summarize, in most simple language, the most complicated ideas, used by all religions of the world, in a evolutionary order. The fundamentals of all Upanishads become particular cases of generalized frame work detailed in “God Speaks”.

Prof. Arya was born in the village Barwan, District Hardoi (UP), and he got his early education at Benaras and the nearby places of Uttar Pradesh, the largest State of India. He showed meritorious qualities right from the early age. He stood second in the State level Merit in Intermediate school exams. His father was a school teacher with a staunch devotion to social aspects of Arya Samaj’s philosophy. He was working hard for removal of untouchability and acceptance of the widow marriage by the society. Goverdhan Singh, Arya’s father, and his companions, regularly engaged in the discussions about Arya Samaj and the traditional Hindu religion. For young Prof. Arya These discussions were seeds of enquiry in to the aspects of God, Soul and Prakriti. It was later at Allahabad and during his higher studies in the USA that he came in to contact with Christianity, which enhanced the struggle in his mind, regarding the truth and life.

Later, while teaching Engineering at Kharagpur he felt that all these questions in his mind were not merely searching for an answer, but for someone who was a solution himself. He immensely felt that, he has enough of intellectual activity and what he had now needed was some one, with inner awakening. One event of younger days that influenced his thinking were related to me as following. Once Prof. Arya’s father took him to a theatre, which was playing the old mythological story of Ghantakarna, a mythological character, who wore little bells on his ears so as to prevent, the name of Vishnu or God from entering his ears. Every time Ghantakarna heard the name of God, he shook his head, in order to make the bells toll and prevent the God’s name entering the ears. In this drama, some artist in the make-up of Lord Vishnu appeared, and started performing his role. Young Arya was surprised to see the figure, which for him ment God’s presence. He wondered as to why people always said that God can not be seen. This moment he was seeing God in front of him in person. He resisted with difficulty the temptation of going forward to the stage to touch the feet of God in person. This disturbed the young child’s heart and he was restless for many days. As a child he had experienced the shadow of the inner joy and the craving that one goes through when he is in the presence of God, in human form.