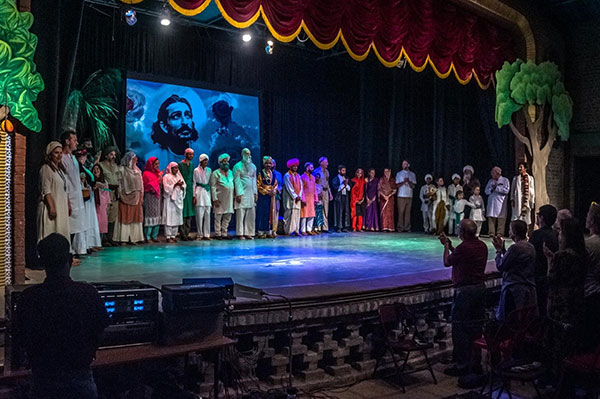 Meher Baba’s Birthday is celebrated every year on 25th February at Meherabad and also around the world by different Baba Centers. At 5 am early morning on 25th of February, pilgrims gather at Meher Baba’s Samadhi on Meherabad Hill for prayers and songs and bhajans in celebration of the birth of the Ancient One. Later in the day an original drama, complete with full cast, sets, and music is staged in the Music and Arts Centre. The other Centers in India and in different parts of the world celebrate the event as per their schedule. At some centers the followers of Meher Baba even gather on the night of 24th Feb and continue with singing, talks and other programmes for whole night until 25th morning 5 am when the Aarti and Prayers are performed and Prasad distributed ..

1956 Meher Baba is about to cut His Birthday cake at Longchamps Restaurant, New York

“Births and deaths are illusory phenomena. One really dies when one is born to live as God, the Eternal, Who is beyond both birth and death.”
— Avatar Meher Baba’s Birthday Message, 1967 –

Every year Meher Baba’s birthday was celebrated by his close mandali as per the Zoroastrian Calendar, which would fall on different days in February, each year. But in 1957 on his 63rd Birthday at Meherazad, Baba desired that in future his birthday be celebrated only on 25th of February. During different years, Meher Baba was in Poona, Nashik, Bombay, Ajmer, Bangalore, Dehradun, Aurangabad, Mahabaleshwar, Mahewa (Hamirpur), Tadepalligudam, and Satara. And on other 26 occasions he was either in Meherabad or Meherazad and once in Ahmednagar for his birthday. Although Meher Baba dropped his body on 31st January 1969 roughly a month before his birthday which was on 25th February, but as per the Parsi calendar his 75th birthday was on 7th February 1969, the day of his internment. The birthday message for his 75th Birthday was already dictated by Meher Baba.

The above list shows all the birthdays of Meher Baba from 1922 till year 1969 with places where it was celebrated.