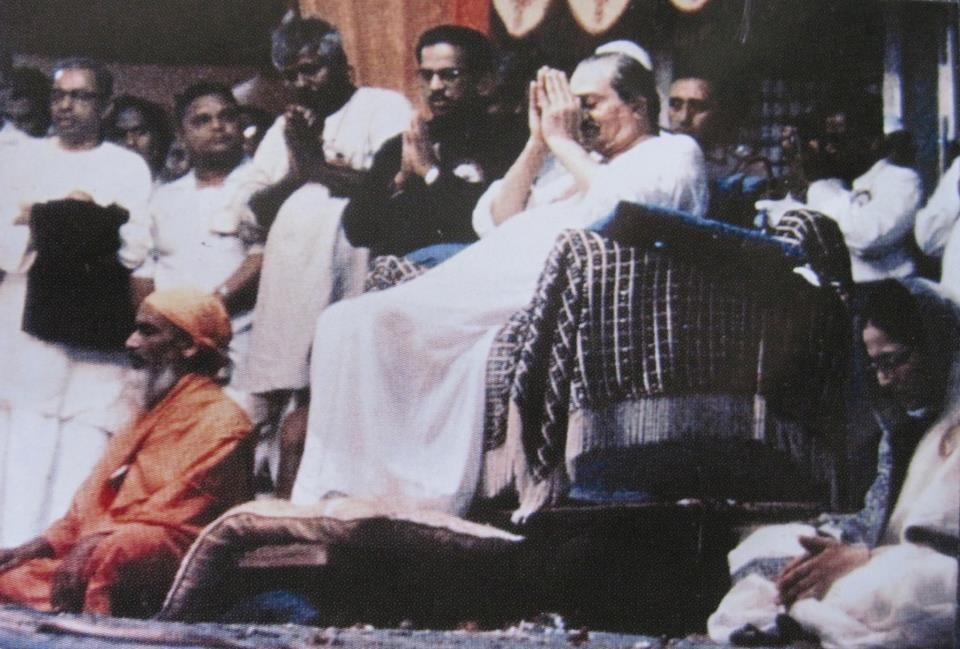 Dr. G.S.N. Moorty [Murthy or Moorthy] Scholar and Disciple of Meher Baba passed away on 28th April 2011 at Gwalior India. He had a long time association with Meher Baba and also wrote a Book “Wonders of Silence”. Moorthy, an Excellent orator and Philosopher was well known for his in-depth understanding of “Geeta” and received awards like “Geeta Bhushan”. Baba lovingly called him as “Talkative Disciple of a Silent Master”. Moorty once played the role of a Dead Body in a play before Baba.. You can listen to his wonderful story in his own voice in the video below. Moorty a Ph.D in Philosophy was always a great attraction for his witty and live talks narrating the stories of Meher Baba’s life to all.

Dr. GSN Moorty – The Talkative Disciple of the Silent Master

To introduce Dr. Moorty to the world wide family of Avatar Meher Baba is like carrying coal to New Castle. Moorty was born in early twenties in a orthodox Southern Indian Brahmin family, and he got his Mantra Deeksha (initiation to holy chants) at a young age from Swamy Sivanand Saraswati of Rishikesh (India). He was a brilliant scholar of Srimad Bhagwad Geeta. Moorty also became known as “Geeta Bhushan” due to his indepth understanding of Geeta. In days of childhood he used to recite all 700 Shlokas of Geeta every morning under the guidance of his father. He was attracted to Meher Baba through a photograph published in a Book “Geetank” available in his father’s library. In the Book Baba was described as The Silent Sadguru. This picture instantly enlightened a longing for Baba in his tender heart.

It was later in year 1941 after going through all the available literature about Meher Baba in his father’s library he was inclined to write a letter directly to Meher Baba seeking His Blessing for observing a successful Geeta Jayanthy programme. Later when drawn to His Silent love Dr. Moorty agreed to Dr. C.D. Deshmukh’s request in early 1955 and attended the November 1955 Sahavas (Being in the company of God) at Meherabad (Ahmednagar- India) for one week. The impact of Beloved Baba’s messages of love deeply affected his heart and he was more and more drawn towards Baba. In the year 1953 he also had the opportunity to address the “World Parliament of Religions” held at Rishikesh (India). It was there when he came to know more of Meher Baba through one of the prominent Baba lover from Dehradoon, who was distributing some rare photos and messages of Meher Baba, and later met Baba with Dr.C.D.Deshmukh.

This is how Dr. Moorty began his long and wonderful association with Baba. Moorty was fortunate enough to have Meher Baba’s Darshan and Blessings during the Sahavas held in November 1955 in Meherabad. Soon Dr. Moorty’s work and efforts to spread Meher Baba’s words became a living example to all other followers. Moorty was one of those precious gems who enjoyed the opportunity of intense exchange of correspondence with Meher Baba and remained His living garland as advised by Baba Himself in 1955 Sahavas. Baba lovingly called him as “Talkative Discipe of a Silent Master”

Dr.Moorty’s efforts brought many new lovers close to Meher Baba, not only in India but in United States and Europe as well. He had a charismatic capability to combine Vedanta and Baba’s Discourses in his narrations. Moorty often used to ask lot many question to his beloved and always got the answers to satisfy his Intelligence. Once on 04 July 1962 he asked beloved Baba about comparison of two kinds of lovers, as who is greater, those who are highly active in spreading His name and messages through different activities and the others who are only inclined to remain aloof and remember Baba. After a little pause beloved Baba said “One who loves me very dearly and with all his heart but hardly attends any meetings and Melas, still his love for me is not any less. And yet another one who loves me so much that in spite of poor health, he moves about from place to place, takes a lot of pains and responsibility on him self for arranging and organizing meetings to spread my name and are also equal in my love and I love them both alike.

Baba further explained to Moorty that “it t is not your love for me that matters, but My love for you which counts.”

Moorty, a Scholar and Philosopher had a Ph.D in Philosophy and shall always be remembered as a great orator with paramount intellectual capacity embedded with subtle wit and humor. He also wrote a small a Book “Wonders of Silence” describing anecdotes from his live with Meher Baba which was published recently.

[Based on information compiled by I.D.Kaushik from Rewa (India) 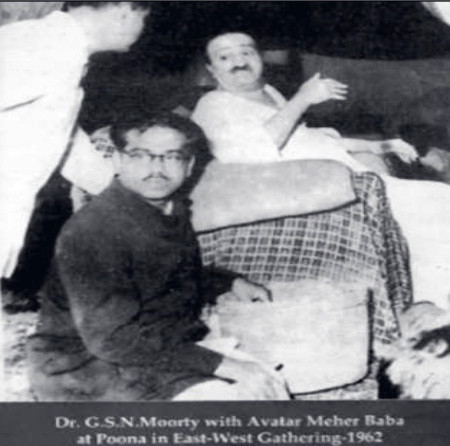 It was in the year 1955 that I first came to Meherabad and saw Meher Baba physically. I was standing in the long queue of lovers waiting for the arrival of Baba at about 7 a.m. for the Sahawas Programme. I was not a Baba-lover then. Everyone in the queue was holding a garland in his hand to be offered to Baba when he would pass by the queue. I was the lone exception who did not buy any garland to be offered to Baba like the others as I was much against the Avatarhood of Baba. Though I had no objection in considering him to be a Mahatma or a Saint, yet I was not inclined to accept him as an Avatar like Rama and Krishna.

Dr. Kanakadandi Suryanarayana was standing by my side. He had earlier asked me to buy a garland, but I refused to do so. I was also curious to know about the method of Baba’s communication since he was observing silence — having given up the use of both written and spoken words. While I was thus deeply absorbed in my own curiosity, Baba’s car arrived and stopped at the main gate on the road near the “Dhuni.” All eyes were on Baba as he got down from the car and stood looking at the lovers. He was wearing a pink coat. His face was emitting golden rays. I was amazed to see two most brilliant star-like eyes twinkling on his face. For a moment, I was totally lost in the radiant beauty of Baba, the like of which was never seen before by me.

Baba was slowly and majestically passing by the queue moving towards me and those at the other end. It then struck my mind that I must also have a garland to be offered to Baba when he would come to me. But the problem was now to leave the queue and get the garland. Luckily, I could see a small flower shop nearby underneath a tree that was just a stone’s throw away from the place where I stood in the queue. I thought it would take at least five minutes for Baba to come near me because I saw Baba receiving garlands in his hands from his lovers. Eruch Bhai was following Baba and was interpreting Baba’s gestures.

Just when I turned my face towards the flower shop and was about to take a leap to fetch one garland, I felt someone’s touch on my shoulders from behind and as I looked back, I was utterly surprised to see Baba holding my shoulders and looking into my heart. I was so much overwhelmed with Baba’s divine beauty that I became almost speechless. At the same time I was repenting in my heart of hearts for not being able to offer a garland to Baba. Just at that very moment, Baba gestured to me saying, “I am the Ancient One. I know everything. Tell me honestly why you were looking to the other side while God Himself was approaching towards you.” I became nervous and replied to Baba saying, “No, Baba. It’s nothing like that. I only wanted to buy a garland for you.”

However, Baba did not leave me at that point and questioned me seriously, “But why did you not buy the garland before coming to the queue as the others had done?”

I had no answer. I was put in an awkward position. I was upset. How to tell Baba that all the time I was thinking against him. I was dumb and not knowing what to say. Yet, I thought for a moment, “If this person Baba is really God — Antaryamin — how nice would it be on his part to leave me thus without further interrogation?” And lo, just where my thought ended, Baba picked up saying, “Well, I forgive you. Don’t worry.” A few seconds after that, drawing my attention to the few garlands that were still hanging on his hand, Baba said, “Look at these garlands. These flowers will fade away. They are bound to be destroyed sooner or later ….. But, I want you to be My Living Garland.”

I could not follow what Baba actually meant by saying “Living Garland” and I was simply staring at Baba with vacant eyes. Baba then held both my hands into His hands and took them round his neck and said, “Now do you understand?” I found myself practically hanging round the bosom of Baba as a child suspending itself in the embrace of its mother.

Giving a soft slap on my cheek Baba pointed to my suspended body and said, “Yes. This is the living garland. But I want you to become a Real Living Garland.”

Baba finally gestured to me saying, “I know everything. Love Me and I will help you.”

One day, Moorty appeared at Guruprasad in a canary yellow shirt. Baba asked him, “How did you ever get your master’s degree in college? You don’t even know what color clothes to put on? You look ridiculous!”

The next day, Moorty came wearing a deep red shirt. Baba commented, “You look more ludicrous than yesterday. You really are a fool!”

The third day, Moorty came dressed in a bright blue shirt, whereupon Baba remarked, “For God’s sake, you look worse than before! Haven’t you got the least color discrimination?”

This irritated Moorty, and he asked somewhat sharply, “Then what color shirt should I wear?”

Smiling, Baba retorted, “Ah, except for the color you are now displaying, choose any other color. All this talk about your shirts was to bring out the color – anger – you have just shown.”

Moorty’s leave of absence from work was almost over, but he wished to prolong his stay. Baba advised him to send a telegram for an extension, but Moorty said, “I will never be able to get it, Baba. It was with the greatest difficulty that I managed to get this much time off.”

Baba replied, “This reminds me of my childhood. A friend of mine could never pass his exam, but falling at his teacher’s feet he would entreat: ‘Sir, I will eat your shit but please pass me!’ The teacher would then pass him. Similarly, you do likewise, and your superior will surely grant you leave.” But, taken aback by the thought of saying such a thing to his boss, Moorty hesitated to do this, and the idea of applying for an extension was dropped and he returned to Calcutta. 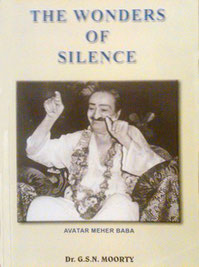