The Rahuri Cabin, nestled under four neem trees, looks like a dollhouse with its shiny white paint and baby blue trim. But do not be fooled. This little room stands witness to so much of Meher Baba’s work!

The cabin was built in August 1936 in Rahuri, where Baba had opened an ashram for the mad and the God-intoxicated, whom Meher Baba called masts. [1] Rahuri is 40 kilometers (25 miles) from Ahmednagar on the road to Nasik. At that time the mandali were staying in Meherabad, but the recently arrived Western followers were accommodated in Nasik. Baba would commute between these two places, stopping on the way to look after the inmates of the Rahuri ashram. Baba would bathe and feed the mad and masts with his own hands. He told Elizabeth Patterson and Norina Matchabelli during one of their visits, “When I wash the mad at Rahuri, I am ‘washing’ them universally.” [2]

Among the residents of the Rahuri ashram were also a few God-intoxicated masts, about whom Baba said, “Through (them) blows a breeze—a breeze of longing for God.” [3] These special souls would recognize Baba and could not contain their joy when they were in Baba’s presence. Among them was the mast Mohammed, who later stayed in Meherabad for many years until his death in 2003.

The Rahuri Cabin was the only solid structure in the Rahuri ashram; the other buildings were temporary shacks of bamboo matting.

In his usual way of frequently changing plans, Meher Baba closed the Rahuri ashram in April 1937 (9 months after it had been opened). Baba ordered the mandali to dismantle his cabin and send all the materials to Meherabad, giving very precise instructions such as “keep the material of my cabin separate and untouched by anybody.” [4]

The cabin was then reassembled in lower Meherabad, near the Mess Quarters, the main building at the time. The stone floor, the bricks of the walls, the frame, the door and windows are the same ones that were originally in Rahuri, and the name “Rahuri Cabin” remained.

Buildings were few in the early years of the ashram and this cabin was used as an “audience hall.” Many people met Meher Baba for the first time in this little room; many stories had their beginnings here. It was also used to house special visitors, as diverse as Walter Mertens, a friend of Carl Jung from Switzerland, in 1938, and Kaka Saheb Kalelkar, emissary of Mahatma Gandhi … quite an astonishing guest book!

It served also as an infirmary—young Meherwan Jessawala stayed there when he was afflicted with boils all over his legs after his family had moved to Meherabad in August 1938.

On the outside of the building are the symbols of four of the world’s main religions. I notice these symbols showing up often in today’s world of iconic representations. I was also surprised to see a drawing with similar symbols in the autobiography of Malala, the young Pakistani schoolgirl who received the Nobel Peace Prize this year. She drew these symbols at the age of 12, dreaming of “interfaith harmony”. In 1931, Baba had said, “The time is soon coming to give mankind a universal spiritual belief which will serve all races of people in every country.” [5]

Why did Baba preserve this small building? How can we ever understand the work he did in it?

Open all day for pilgrims to sit quietly or for musicians who like to play inside, the Rahuri Cabin keeps its secrets to itself.

[1] According to Meher Baba, a “mast” is a seeker of God who becomes so intoxicated with the experience of the Divine that he loses interest in the external world of forms. His behavior may resemble that of a “madman” although it is actually a reflection of an advanced inner awareness. (See The Wayfayers, by William Donkin, for more information.) 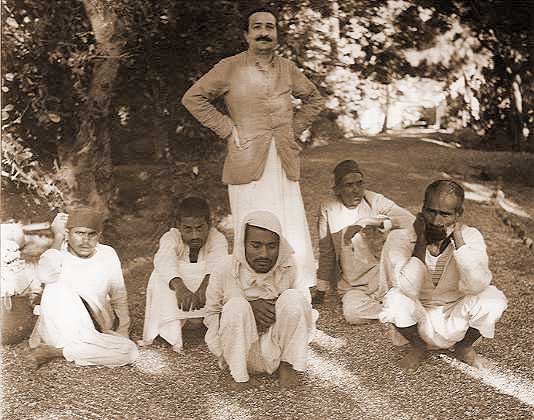 THE ASHRAM IN RAHURI was declared open in August of 1936, and the first of the masts and the mad were brought there. This was the beginning of a very important phase of Meher Baba’s work with the mad and the God-mad, and one which was to occupy a great share of his time for many years.

Rahuri, a small rural town, lies on the road that links Ahmednagar
with Nasik and it was a convenient place for Baba, since his permanent headquarters remained at Meherabad. The town was located near the banks of a tributary of the Godavri River, and plentiful rain made it abound with a great jungle forest. The ashram was built in a grove of orange trees and among a number of large mango trees, making it a pleasant atmosphere for such work.

Settled in Rahuri, Baidul was given the duty of cooking for the ashram inmates and the few mandali who were living there. Baidul was also to help look after the mad and masts. Pleader and Raosaheb were appointed supervisors. Pleader, Kaka Baria, Savak Kotwal and Homi Irani (1) were directed to travel about and bring back masts and mad persons from different places.

At this time, Dhake was a practicing attorney in Rahuri and also
stayed at the ashram to manage the office affairs. A dispensary run by Dr. Nilu was later opened in Rahuri. Brother Jal was his assistant. Word spread fast of the free medical care being given in that remote rural area. Hundreds of sick people came each day, many of them from very remote areas buried in the hidden recesses of the wildest sort of country. Nilu and Jal were busy from dawn to dusk attending to the sick, many of whom had never seen a doctor before. Besides helping supervise the dispensary, Jal managed the office in Dhake’s absence.

Gustadji and Ghani Munsiff were also residents of the Rahuri ashram. The remaining men mandali, consisting of Chhagan, Kalemama, Kalingad, Padri, Pendu, Sidhu and Vishnu, stayed in Meherabad, while the women mandali stayed in semi-seclusion on the Hill.

During most of the next three months, until October, Baba resided in a small one-room cabin built for him there in Rahuri. The ashram was mainly for the mad, ordinary insane men or retarded idiots found in the towns and villages of the surrounding areas. There were a few genuine God-intoxicated masts and a few God-mad, but for the most part the men in the ashram were psychotics of one kind or another, or brain damaged lunatics with nothing spiritual about them. The inmates were given every freedom, except that of stepping outside the extensive limits of the ashram grounds.

(1) Homi, Kharmen Masi’s son, had been a student in Meher Ashram with his two brothers and was now helping in Baba’s work.