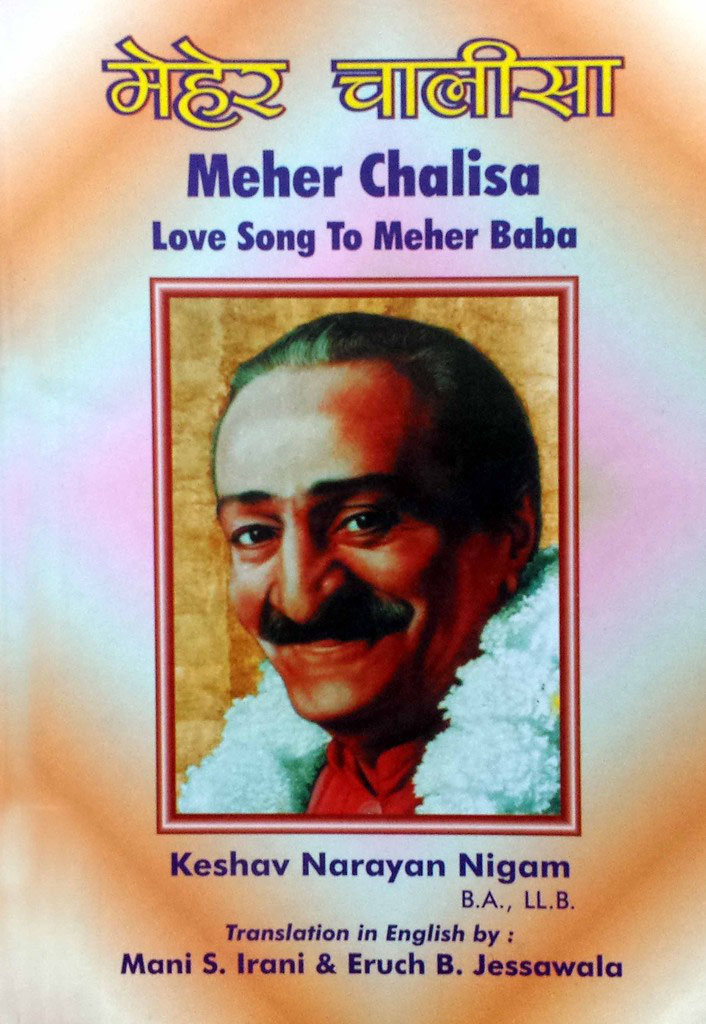 “Meher Chalisa” – A set of 40 verses in praise of Meher Baba composed by Keshav Narayan Nigam of Hamirpur India. Keshav Narayan (Born 16 June 1909 – Died 08 Feb 1987) was a follower of Gandhi and took part in the freedom struggle of India. In jail he met Shripat Sahay and came to know about Meher Baba. Later he met Baba and became a follower. Whenever in Baba’s presence Keshav Narayan Nigam was always asked by Baba to recited these verses known as Meher Chalisa. He last recited these on final Darshan day of Meher Baba, 07th Feb 1969, inspite of his ill health and advanced Parkinson disease, which made him very restless all the time. He once said in his intense suffering a couplet referring to Baba. “हम “आह” करेंगे, तो वो “वाह” करेंगे. तो हम भी उनको “वाह” ना करने देंगे. “If I will say “Aah” (An exclamation of complaint), he will “Wah” (Used typically to express admiration). So I will also not let him say “Wah”.

Lord Meher by Bhau Kalchuri reports that Meher Chalisa was recited just after Baba spelled out “Avatar Meher Baba ki Jai” for the first time in 1954 at Hamirpur. These verses are now composed in Music by various musicians and sung at Meher Baba Centers regularly. 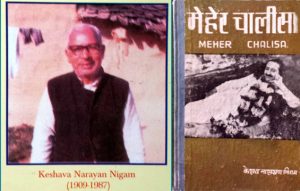 About Meher Chalisa by Kendra Crossen

Among Meher Baba’s many ardent lovers in Hamirpur district in northern India, Keshav Nigam (1909-1987) is one of those known as a “giant in Baba’s cause.” By profession a lawyer, before coming to Baba he had been a follower of Gandhi in the struggle against British rule of India and was imprisoned for political activism. He first heard the name of Meher Baba in 1942 but did not come to accept Baba as the Highest of the High till 1948-49. Among other tireless Baba work, Keshav made translations into Hindi of Baba’s messages, circulars, and discourses. Translating God Speaks at Baba’s order, he completed the work by dictating it to a helper, despite suffering severely from Parkinson’s disease, with shaking hands, impaired memory, and speech difficult to understand. He also translated Jean Adriel’s Avatar into Hindi. (It’s quite amazing how this book by a Western woman brought many Indians to the Avatar present in their own country — thanks perhaps to Keshav’s translation.)

Also at Baba’s order Keshav wrote his own autobiography in English, and Baba said the original was to be published no earlier than 2003. Thus, although written in 1970, My Life Story with Avatar Meher Baba by Keshava Narayan Nigam was published in 2003 by his daughter, Dr. Meher Jyoti Kulshreshtha, Lucknow, in the original English-language version as requested by Baba. (It had been published in Hindi translation in 1988.)

Why Baba does what he does is often a mystery, but could we not suppose that by asking this humble person, unknown to the world, to write his autobiography in English for future publication, Baba showed that he wanted people all over the world (English being widely used as a common language in world commerce and communication) to know about Keshav as an example of a true lover of God? Keshav’s own original Hindi composition, a devotional poem/song titled Meher Chalisa, is already well known to Baba-lovers, and since it pleased the God-Man, surely it will be known to the world in the future.

Why would Keshav Nigam be worthy to go down in history? Keshav Nigam’s birthplace, the village of Mahewa in Hamirpur district, U.P., was where, in 1952, Keshav directed the building of a clay hut for Meher Baba and his mandali to stay in, situated on a raised mound amid densely forested surroundings outside the village. Keshav named the place Meherastana — the Abode of Meher. Baba stayed there for the first time in November 1952. It was at this place, Meherastana, that on February 10, 1954, Baba publicly announced that he is the Avatar of the Age, by spelling out on his alphabet board for Eruch to read out: “Avatar Meher Baba ki Jai” (Victory unto Avatar Meher Baba) — words that will resound from the lips of his lovers for hundreds of years. In an extremely happy mood, Baba “told those gathered that it was the first time in this Incarnation He had openly and clearly declared Himself to be the Avatar. And from that day on, Meher Baba continued to assert His Avatarhood in public and in private” (Bal Natu, Glimpses of the God-Man, Meher Baba, 5: 9).

In a preface to Keshav’s autobiography, Erico Nadel wrote: “It was no accident that Meher Baba first publicly declared himself the Avatar before a small gathering of friends in a remote village by a fire in the middle of a long quiet night just after hearing Keshav’s poem, ‘Meher Chalisa,’ rather than, for example, as a media event on the cover of Time magazine.”

Can there be any doubt that Meher Chalisa belongs among the great prayers and hymns to Meher Baba? Keshav Nigam recited the Meher Chalisa before Beloved Baba himself not only in life but also during the seven days when Baba’s body lay in his Tomb prior to interment. According to Dr. H. P. Bharucha’s account, Meher Baba’s Last Sahavas, Keshav stood in the Tomb and recited the forty verses despite his advanced illness.

Here we bring you Meher Chalisa in English translation and in a recording of a Hindi performance of the song by Meera Kale of Jabalpur (also on YouTube). The word chalisa means “forty,” and such forty-verse songs are a traditional type of Hindu prayer often dedicated to a deity (as in Hanuman Chalisa, Ganesh Chalisa, Kali Chalisa, etc.). The verses below are followed by a glossary of names and terms from the poem, arranged by verse number. The notes are important for understanding the verse if one does not know Hindu lore.

Mrs. Meera Kale, a superb vocalist trained in Indian classical music, is the daughter of Meher Baba’s old disciple R. P. Pankhraj. Her husband, Niket Kale, is the son of Murli Kale (one of the Prem Ashram boys, who later became Meher Baba’s New Life Companion), and the grandson of Kalemama (a member of Baba’s mandali from 1926). Niket writes on his site TrustMeher.org, where this recording is available for free download: “The Meher Chalisa is widely sung amongst Indian Meher Baba Centers and homes, along with Baba’s Aarti. This composition was always sung before Meher Baba and Baba liked it very much. It is presumed that Meher Chalisa … [is] sung in the same tune as have been sung before Baba.”