DHUNI OF MEHER BABA now ON 12th OF EACH MONTH

Meher Baba Dhuni at Meherabad. The Dhuni fire ritual was also observed by Meher Baba in a modified form. It was among the very few, bona fide religious ritual that Meher Baba performed. It is still performed on the 12th of each month, in accordance with conventions established by Baba, near the Meher Pilgrim Center in Lower Meherabad, and is one of the important focal points of the Amartithi celebration in January of each year. Meher Baba’s Dhuni was first lit on 10 November 1925, when some villagers approached Meher Baba about a severe drought that threatened their crops. [Source: Wiki] 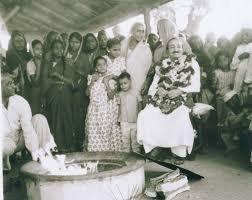 The Dhuni. In response to the villager’s plea to save them from severe drought, Baba first ordered a Dhuni fire to be lit on November 10th, 1925 at lower Meherabad. (For detailed account refer to the seventh paragraph of page 3 of “History of Meherabad.”)

“In 1925, the monsoon season failed. On November 10th, in response to villagers’ pleas to save them from the extreme drought, Baba ordered that a Dhuni fire should be lit. Some of the mandali dug a pit north of the Table-House while others collected firewood and prepared materials. The fire was lit at 11:00pm. After some devotional music, Baba asked the villagers to depart quickly, but by the time they reached their homes, they were drenched by torrential rain. The heavy rains fell for fifteen hours and all the wells were filled. On that anniversary one year later, the Dhuni was lit again at 7p.m. and again it rained. The Dhuni was also lit on the 2nd anniversary and this time it rained for two and a half days causing severe flooding. The villagers came to Baba again, begging Him to stop the rain. [Seventh para of page 3 of “History of Meherabad”

On December 12th, 1941, Baba was staying in seclusion in the Tomb up the hill. He came down the Hill, but remaining in seclusion He had the Dhuni curtained off. Besides Gustadji who lit the Dhuni, only Padri, Pendu and Pleader were allowed to be present. Baba indicated that this time the Dhuni was being lit as part of His internal work, not to bring rain. Exactly one month later Baba allowed five of the mandali to be present, and He had Papa Jessawala light the Dhuni in honor of Upasni Maharaj who had recently dropped his body. From that day onwards, Baba ordered that the Dhuni be lit on the 12th of every month at Meherabad. The current platform around the pit was built in 1948. On September 26th 1954 Baba lit the Dhuni Himself during the Three Incredible Weeks. Meher Baba last attended the lighting of the Dhuni on November 12th, 1955, during the Sahavas program. At that time He asked all attending to try to sacrifice some desire or shortcoming to the Dhuni. This advice has been followed since then.

In accordance with Baba’s order, the Dhuni is a monthly event at Meherabad. Participants throw a stick of sandalwood dipped in ghee into the fire, an act signifying the renunciation of some shortcoming. Meher Baba’s own poem on the Dhuni is recited on the occasion.

Across the road from the Dhuni, the Sai Darbar stage platform was rebuilt in 1942 and this site was again used for two important meetings in December 1942 and May 1943.

It was the month of September — the tail-end of monsoon at Meherabad. The rains during the first three months, beginning from the first week of June had been very feeble which foreboded a drought if the secondary monsoon current failed to arrive.

This secondary — September rains are very essential, for, during this period the major crops of jowar, (milo) wheat, gram etc. are sown. These crops are helpful, most helpful, to the farmers because they give the farmers their staple grain plus animal fodder in plenty. And since the primary current was feeble, the crops had failed in many places, in fact the primary crop was almost lost. Now, if the secondary current also failed there would be drought.

In this kind of situation, some far-off villagers, who had suffered most, came in a bunch, singing bhajans to Baba in Meherabad in the old bungalow where he was occupied with the Mandali during the day. This bhajan party is called Dindi, where a number of people with musical instruments and a slender two-ended drum and brass taals (sort of brass castanets, which give a sweet metallic sound) play on the instruments and the singers sing bhajans (devotional songs) in unison.

Such Dindi came to Baba with their tale of sorrow, that is, the failure of rains; and invoked Baba to do something about it. Baba, being the Compassionate One, gave them a patient hearing and told them to return immediately to their village and not to worry. Then He ordered the Mandali make preparations for a Dhuni to be lighted.

Due preparations were begun — wood, sandalwood, clarified butter etc. were accumulated, also a shallow pit was dug in the ground for the fire. (Dhuni fire has always a very shallow pit to receive the glowing coals which, ultimately turns to ashes which has its own value for the devotees, to be applied to the forehead and to be taken home to be distributed amongst others as it comes from a saintly abode).

At about 5 P.M. the first Dhuni was lighted, in the presence of the Master, who then told the Mandali to sing Upasni Maharaj’s Arti. The Mandali did so and when the Arti was almost half over, it began to drizzle which in turn developed into a very good shower, cooling the earth and drenching the Master and the Mandali. Later we received the information that the Dindi also got drenched on their way home as they too received good rains. Thus their prayers were answered.

After we had finished the Arti, we all ran for cover nearby in the first school opened for Arangaon village boys by Baba. There we all sat down on the ground and, Baba then told us all to write a poem in praise of the Dhuni. The attempts by some were good, while others fell flat. Anyway, being an order everybody attempted according to his capability.

From the time till we all again left Meherabad for some other place, the Dhuni was alight 4 hours of the day. But, during our absence, since none remained in Meherabad, the Dhuni became cold. After our return it was revived by Baba who ordered the Meherabad residents to light the Dhuni on the 12th of every month. This order has been carried out to this day.