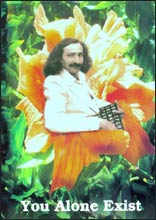 Meher Filmworks is devoted to quality video presentations of Avatar Meher Baba – His life, His image and His Mission. Two films have been produced. The first film, God In Human Form, has been translated into 8 languages. You will find all language versions here in their entirety. The second film, You Alone Exist, is a music video of the prayer-poem written by Meher Baba and disciple, Bhau Kalchuri.

Visit the website for ordering information for Meher Baba Films.