Collection of Sayings of Meher Baba – Compiled by Chris Maier 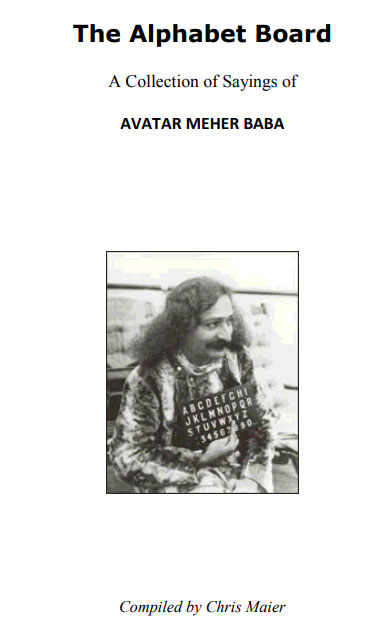 Introducing a new collection of quotes by & attributed to Meher Baba, arranged in alphabetical categories, a format inspired by Meher Baba’s use of the alphabet board.

We hope that you enjoy these quotes and find the collection useful. We at Peeps wish to point out one important issue: Not all “quotes” of Meher Baba are his exact words that were written, dictated, or gestured and recorded by the Mandali with Baba’s approval and corrections or published under his supervision. Some quotes may be recollections of what Baba told someone and phrased as remembered by that individual in their memoir.

Don Stevens has identified several categories of Baba’s words, the most reliable being those that he called Baba’s “special words,” which Don believed contain a charge of spiritual energy that would benefit those who “worked with” those words (i.e., not just read them but put them into practice). Thomas J. Hickey writes:

“The criteria that constitute Meher Baba’s special words … are the manner of their being given out, reviewed and corrected by Baba himself. … On Meher Baba’s own testimony it is necessary to distinguish different aspects of his words. Baba himself said that sometimes he speaks in our language, which we can understand, and at other times in his language, which we cannot understand, and sometimes in a combination of the two, which we can only partially understand. In addition, some of Baba’s words are better documented than others, e.g., things that Baba spelled out on the alphabet board that were written down immediately are more reliable than things Baba reportedly gave out that were subsequently reconstructed from notes or recalled from memory.” [Source: http://www.corespirituality.com/journals/ds_1.html]

I do not mean to suggest that Baba did not intend some of the words quoted in this collection or that they are not genuinely in the spirit of Meher Baba. But the reader should be aware of the distinctions drawn in the above comment by Tom Hickey. Tom has also added further clarification to the Comments section.

There is no substitute for reading complete books by Meher Baba. However, we all enjoy finding quotes on particular topics. I hope Chris Maier’s book, which he obviously put a great deal of work into, will inspire readers to go to the primary sources, particularly those by Meher Baba himself, and read them thoroughly.

In the report from Don Stevens above, it is said, “Don Stevens has identified several categories of Baba’s words, the most reliable being those that he called Baba’s ‘special words,’ which Don believed contain a charge of spiritual energy that would benefit those who ‘worked with’ those words (i.e., not just read them but put them into practice).”

A couple of things need clarification about this. What follows is my interpretation. Others who spent time with Don may have their own interpretations based on their understanding of what Don said about it. And there are many reports and lectures by Don where he explains this himself.

First, it is not quite correct to say that Don “believed” the words Baba indicated were special contained a “spiritual charge”. According to Don, Baba used those very words. Don reported on many occasions that Baba told him through Eruch interpreting his gestures that the first eight chapters of God Speaks, according to Don, and Listen Humanity, Part II were given out in such a manner that Baba had attached a “spiritual charge” to them and that anyone who “worked with these words” would absorb something of the “spiritual charge” that would be important in their spiritual ongoing, whether or not one understood two words running.

Baba did not mention to Don other works whose words may also have been special, but he also did not exclude the possibility of their being other special words. According to Don, Baba explained why they words were special based on the why they were given out. It does seem that other works of Baba were given similarly. So this question of other special words is up in the air without Baba’s explicit pronouncement. We simply do not know, since Baba only specified the first eight chapters of God Speaks and Listen Humanity, Part II, to Don. As far as I know, there is no other record of Baba mentioning special words to which he attached a spiritual charge.

Baba also charged Don with the task of letting his followers know of this extraordinary opportunity afforded by “working with his special words”. Don recalled this story from memory many years later and set out to carry out that charge which was as yet unfinished since Don had been occupied with other charges that Baba had given him, mostly the translations of works that Baba mentioned into the languages that Baba specified. But Don was very sure of the the substance of what Baba had told him then through Eruch, recalling the incident vividly when he recounted it. As far as I am aware Don reported it in the the same way on many occasions through the God Speaks Seminars, at lectures, and to individuals.

Secondly, I never heard Don mention that working with these words meant not just reading them but putting them into practice. In fact, Don interpreted what Baba had said as reading these words over many times. This is corroborated by Baba having told people to read God Speaks a certain number of times, some five, others ten. As I recall, Baba told Robert Dreyfuss to read it “until it sings in your veins.”

Don also held that working with Baba’s words was not limited to individuals reading these words alone, but included reading and discussing them with others, although it was not necessary to work with these words with others. This was one of the points of the God Speaks Seminars Don led internationally and an important part of his group work. Don viewed group work as an added opportunity based on his own intuitions, which he set forth in several of his books and explained in lectures and to individuals. However, it is important to note that Don presented working with Baba’s special words as a supererogatory opportunity that Baba had provided his lovers rather than as a requirement or order. Don felt that after Baba’s physical presence was gone and the mandali and close ones had passed, Baba’s words would assume importance, which is a reason that Baba spent so much time and effort on them.

Don also emphasized the internal links that Baba the importance of which Baba had mentioned in the last message on the alphabet board, both with Baba and also others with whom one had karmic connection. Don felt that this was the basis for the formation of working groups.

To Don “working with Baba’s special words” meant working with them as lectio divina, at least as I understood what he was saying, although he did not use this concept specifically. But it is common to all spiritual traditions, where it is held that the consciousness of the giver of the words is embedded in them. This would, of course, be true of all Baba’s words.

But Baba had indicated something special with respect to his special words in addition to other of his words, all of which are “special” in the sense of having been given by the Avatar of the Age. Other than the few sentences that Don reported about it, there is no way to know more about what Baba meant about the “special words” he specified to Don as having been imbued with a spiritual charge. Anything more is speculation.

Beyond working with these words, for Don there was also the desire to grasp intellectually the conceptual model that Baba has left us with the idea that Baba will provide the conviction to accept it and integrate it in one’s life, and over time fill in the intuition and then the actual experience needed to realize it. So this can be viewed as a spiritual practice that structures unity amid diversity afforded directly by Baba.

Don regard this intellectual endeavor to understand as consistent with Baba having said that humanity is passing from the age of intellect to the age of intuition, so he would satisfy the intellect by revealing in works like God Speaks what had previously been reserved as closet teaching for close disciples and was only revealed to the public symbolically. So for Don working with Baba’s special words, especially in God Speaks, satisfies the intellectual desire to know the whole in terms of a conceptual model, while also ushering in the age of intuition through developing the intuitive faculty, which Baba said would be his gift to humanity in this advent.