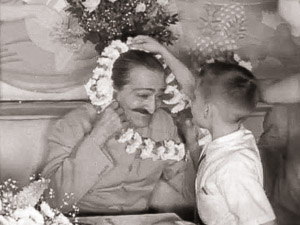 The Official Web Site of the Meher Baba Association in the UK Celebrating the life, work and teachings of Meher Baba, Avatar of the Age .. Meher Baba’s first visit to England was in Autumn 1931, travelling by boat from India. One of his fellow travellers was Mahatma Ghandi, with whom he spent many hours.

.. On this visit, Meher Baba made contact with a number of individuals who became lifelong Baba lovers, forming the core of his devotees in this country. This group included Delia de Leon, Will and Mary Backett, Charles Purdom, Kitty Davy and Margaret Craske.

Meher Baba made a profound impact on them. Their meetings took place in London and in East Challacombe, Devon, where Meredith Starr had established a spiritual retreat.

Margaret Craske described her first meeting with Baba. “…I went into the room and was completely won over by the love which seemed to permeate his whole personality.”

Quentin Todd, another member of this early group, described an early interview with Meher Baba. “We sat for several minutes in silence and I was aware of a great feeling of love and peace emanating from him; also a curious feeling of recognition came to me, as if I had found a long-lost friend.”

Although Meher Baba had begun his silence in 1925, this was never a barrier to communication with him. Delia de Leon wrote of her early impressions: “I never felt Baba didn’t speak. I was never conscious of that because he was always speaking to your soul, to your heart.”

Meher Baba’s subsequent visits followed a similar pattern. They were opportunities for existing Baba lovers to see Meher Baba in person and to experience the love that radiated from him. And they were times when those who were curious to meet him could do so, often with the result that they found themselves irresistibly drawn to him.

The Meher Baba Association, a registered charity, has had a number of offices and premises in London and elsewhere in England. It has always played a special role in Meher Baba’s work and he is its perpetual President. (Excerpt from Web Site)