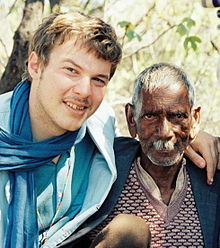 In 1977 when my brother Win turned seventeen, I gave him my grandfather’s well broken in “Leica” camera and sent him by himself to India. I had been too shy to take photographs of Meher Baba’s Mandali when I was there, so knowing how bold he was and how much he loved film and photography, I asked him to take photographs of the Mandali for me. Little did I know that he possessed the magical gift that by looking into the camera and focusing, he produced one incredible photograph after another….

… Win stayed for long periods in India and took photographic accounts of many events that took place at Baba’s home in the East. He traveled and photographed extensively in India, to all the places where Baba did His work. Win graduated from college with highest honors and became a freelance journalist and assistant editor and photographer of a Long Island, New York newspaper. He also studied filmmaking and he was the assistant editor of the film, “Meher Baba, Avatar of the Age”.

Our dear Win passed away in 1990 and left behind a huge collection of photographs and slides, and sound recordings of the Mandali and others telling their stories of life with Meher Baba. Win made a huge effort to get these precious photographs and recordings out to the world. My son, Charles Nordeen and I continue to carry out this mission for him. Win was one of the most considerate, sweetest and funniest people I’ve ever had the pleasure of knowing. – Susan White

[Website URL http://www.wincoates.com has now expired and not working. ]
[For more info and his photographs please visit :
https://www.meherbabatravels.com/arts/win-coates/

Win Coates was an American documentary photographer and a follower of Meher Baba.

Born in Long Island, Win Coates was a photojournalist who worked in the United States, Nicaragua, and India. He devoted much of his short adult life to photographing scenes of India and events in relation with eastern spirituality, most notably Indian master Meher Baba after Meher Baba’s death in 1969. Coates took several thousand photographs and recorded hundreds of audio tapes of Meher Baba’s intimate mandali all over the world, and also documented Meher Baba’s samadhi (tomb) and dhuni, along with surrounding countryside and local villagers. Many of the photographs pertaining to eastern spiritual subjects on Wikipedia were taken by Win Coates. Win also edited the 1987 motion picture documentary, Meher Baba, Avatar of the Age (uncredited), directed by Irwin Luck.

Win Coates had a unique Vérité style of photography. He used only a single-lens Leica camera that he would generally keep out of sight, often engaging a person in casual conversation to distract them, until he saw his moment. He would then lift the camera and snap a picture, in many cases not looking through the viewfinder. Often people did not know he was taking pictures. Among his surviving portfolio can be seen the results of this candor—subjects caught off guard or mostly unawares—even though they are looking toward the photographer. The difference is that they are egaged with the photographer as a person and not his camera, which would cause them to consider how they appear. In other cases he captures people and events completely off-guard. The results are unusual and often reveal how a person relates to a living person instead of how they might wish to be perceived in posterity. Thus he captured people as they actually appeared in meeting them, while other photographers might have captured the subject’s preferred self-conscious position. The result is unusual—people sometimes looking “at” the camera, but not posing.