It was during 1939 Meher Baba was at Nagpur when a person visited Baba seeking help for some personal problem. With Baba’s grace his problems were resolved and soon he visited again and gifted Meher Baba with 37 acres of land in his home town Mandla district. Baba was initially reluctant but on visiting Mandla was pleased with the environment there and decided to setup His Ashram and Samadhi at Mandla. The owner of the property Mahendra Lal Choudhary, an ex MLA Maharajpur (Mandla) had already gifted around 37 acres of land to Baba (MS Irani) and Meher Baba asked additional 71 acres of land to be purchase, making it a total 108 acres of property. Baba then decided to set up His Ashram and other facilities at Mandla and also instructed to build this Samadhi, which is an exact dimensional replica of the Samadhi at Meherabad, where Baba’s physical body is enterned. Later Meher Baba postponed the project of setting up an Ashram at Mandla, and the idea was ultimately abandoned, for reasons best known to Baba.. The property however was there and during 1949 Baba instructed to form a Trust for its maintenance, by including the donors family members as Trustees. This Trust was registered as a personal Trust, as till that time the Charitable Trust Act was not passed and applicable in India. With such complications a large portion of land got sold out, and remaining as of now is around 20 acres of land which is still vacant. After initiative efforts from AMBPPCT who as per Trust’s deed are responsible for maintaining any land or property in the name of Meher Baba, the Meher Kuti at Mandla got restored and now pilgrims have started visiting the place and occasional programmes are held. If you are interested in helping the Trust for maintenance of Mandla Meher Kuti please contact AMBPPCT through their website. [Updated October 2020] 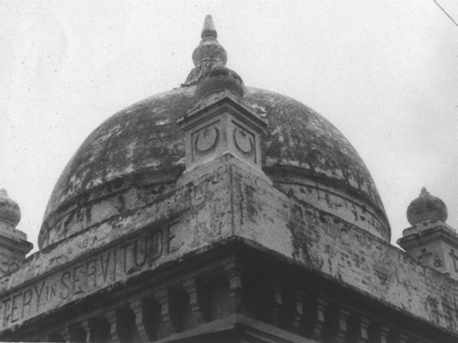 [Page : 2417 Lord Meher]
The question of establishing an ashram was being further discussed during this period. After accepting Chowdhary’s offer of land in Mandla, a plan had been drawn up. Some people in Mandla knew about Baba, but to make the general public more aware of who he was, a public lecture was arranged on May 12th, in which Dr. Deshmukh, Norina Matchabelli and Nadine Tolstoy delivered speeches. Norina was most interested in setting up the new ashram and would gather information and seek support by contacting influential citizens. Baba, however, did not participate actively in this as he was too occupied with his mast work, which he indicated was more important above all other matters.

[Page : 2535 Lord Meher]
The postponement of opening an ashram in Mandla disappointed many persons there. Their letters requesting Baba to reconsider came frequently to Bangalore. It was therefore decided to build a small structure on the property in Mandla. For that purpose, Baba sent Pendu, Papa Jessawala and Homi there. Baba instructed Pendu to build an exact replica of his tomb on Meherabad Hill. Pendu and Papa were to look after the construction work for two months and Homi was to cook for them. Baba remarked, “Mandla is my spiritual home of ages ago. I am having this small structure built because of my link with it from the past.”

As per instructions of Meher Baba, DD Jasawala executed instrument of Trust, on behalf of Baba, for management and maintenance of the property in Baba’s name at Mandla. But owing to the engagement of the Mandali in the new life the said property remained uncared. Meanwhile some of the local residents of Mandla region took the advantage and illegally encroached the property. Later these entrants filed a suit with the local Court authorities for granting adverse possession of the property, as they were in possession of the same for a long time.

The increasing illegal occupation of the land owned by Baba kept worrying the Avatar Meher Baba Trust, and recently in the year 2001, Shri Ram Sharma of Jabalpur, along with Advocate SK Dixit were given the task of resolving the disputes of the said property, and take suitable necessary action on behalf of the Trust. During the pendency of various suits for legalizing the encroached occupation, Shree Ram Sharma on behalf of the Trust, filed an application for impleading him in the array of defendents. The learned lawyer SK Dixit argued in the district Court of Mandla on behalf of the Trust, and established the fact the property was a Trust’s property [Created under the instruction of Meher Baba in 1949] and any adverse possession on such land is not maintainable. He along with various Baba lovers from Jabalpur and Mandla, also met a number of higher authorities and explained the facts best known to them.

During May 2003 the Honorable Court after hearing the submissions of both the parties rejected the application for grant of injunction to the illegal dwellers and the decision was in our favor.

The Structure at Mandla bearing a close resemblance to Baba’s Tomb at Meherazad, was thus evacuated of the illegal dwellers and a remote small room behind the Meher kuti was constructed and provided as charity and immediate relief to the two persons [occupants] of the Kuti. However the legal action against those who have occupied the area surrounding the Meher Kuti is under process and may take it’s own course of time but the Old Mandla Samadhi is now in our possession.

The Meher Kuti is now free from occupants and it’s possession is restored to the Baba Lovers and avatar Meher Baba Trust. Baba lovers around the world are requested to visit this place and the replica of Samadhi of Baba, which has immense historic importance, as this just could have been the final resting place of our Beloved Meher Baba.

Mandla is just on the way to the Internationally well known Wild life Sanctuary of Kanha.[ Just 160 kms from Jabalpur]. Thousands of indian and Western tourist go to Kanha every year to visit the National forest and see the very high density of wild life and the Indian Tigers in the Wild. Baba lovers can always enjoy the greenery of the Woods at Kanha and also visit the Meher Kuti and Marble Rocks Water fall near Jabalpur, which Baba visited in 1939.

Mandla, a place in Madhya Pradesh (India) was chosen by Meher Baba in early 1940’s for spiritual activity. A Samadhi like structure was also built there as per Baba’s instructions on a piece of land gifted to Meher Baba by the local persons. Later Meher Baba decided to abandon the project and the Structure was unattended for long. Meher Baba lovers at Mandla decided to hold a Baba gathering at the place on 29th and 30th of December 2009, which was attended by a number of Baba lovers from different parts of India including Meherabad. The Mandla Structure or Meher Kuti what ever you call it, is almost of the same dimension of the Samadhi at Meherabad. The place is quite near to one of the finest Reserve Forests of India “Kanha Kisli” where a large number of tourist visit every year to view the animals and the Great Indian Tiger in the wild.

Follow here for a full report on Mandla Programme with photographs by Bob Underwood:

Tony Griss and I traveled together to Jabalpur and joined fellow Ahmednagar pilgrims, Ramanujan, Darunkar and Ashok Ambulkar. Since we had a little time to spare , We took a side-trip to Marble Rocks. This was a thrill for me.. Marble rocks is a water filled canyon cut in various shades of marble. The clifs about 100ft high and the water about 600 ft deep in places.. We boarded a boat and were rowed out at sunset thru about a mile or two of canyon singing and enjoying the other tourist boats, the guides and the presence of the Avatar in Nature. Baba had visited this place and stayed at a Govt Rest House. On inquiry we learned that the caretaker who met Baba and his son had both passed on. the current caretaker was well aware of the History and showed us photos of Baba…

All this sight -seeing put us way behind schedule and we drove thru a long long pot-holed road thru a wilderness in a remote section of India arriving at around 11pm. Shaligram Sharma met us.. The events of the Sahavas were in Hindi but I thoroughly enjoyed the love, appreciation, … and kindness of EVERYONE I met…Babas language is of the Heart and this Mandala gathering was soaked in His Love. I especially appreciated the kindness and hard work of Lucky who looked after us and the friendship of Shyam. The Quwalli singing was outstanding!!

I stepped outside to roam around and had chai with a local guy who took me on a short boatride across the Narmada river.. He introduced me to his brother who had no functioning hands. I enjoyed meeting both of them……

The next day was drizzly-wet and we paraded about 1 km thru town to a building Baba established to resemble the Samadhi. It has steps leading up to a small porch and windows in front. Immediately over the threshold, steps lead down to the crypt.. We took darshan here.

I was suprised to see ANOTHER Samadhi—-especially one built under Baba’s order.

It was such a sweet gathering. 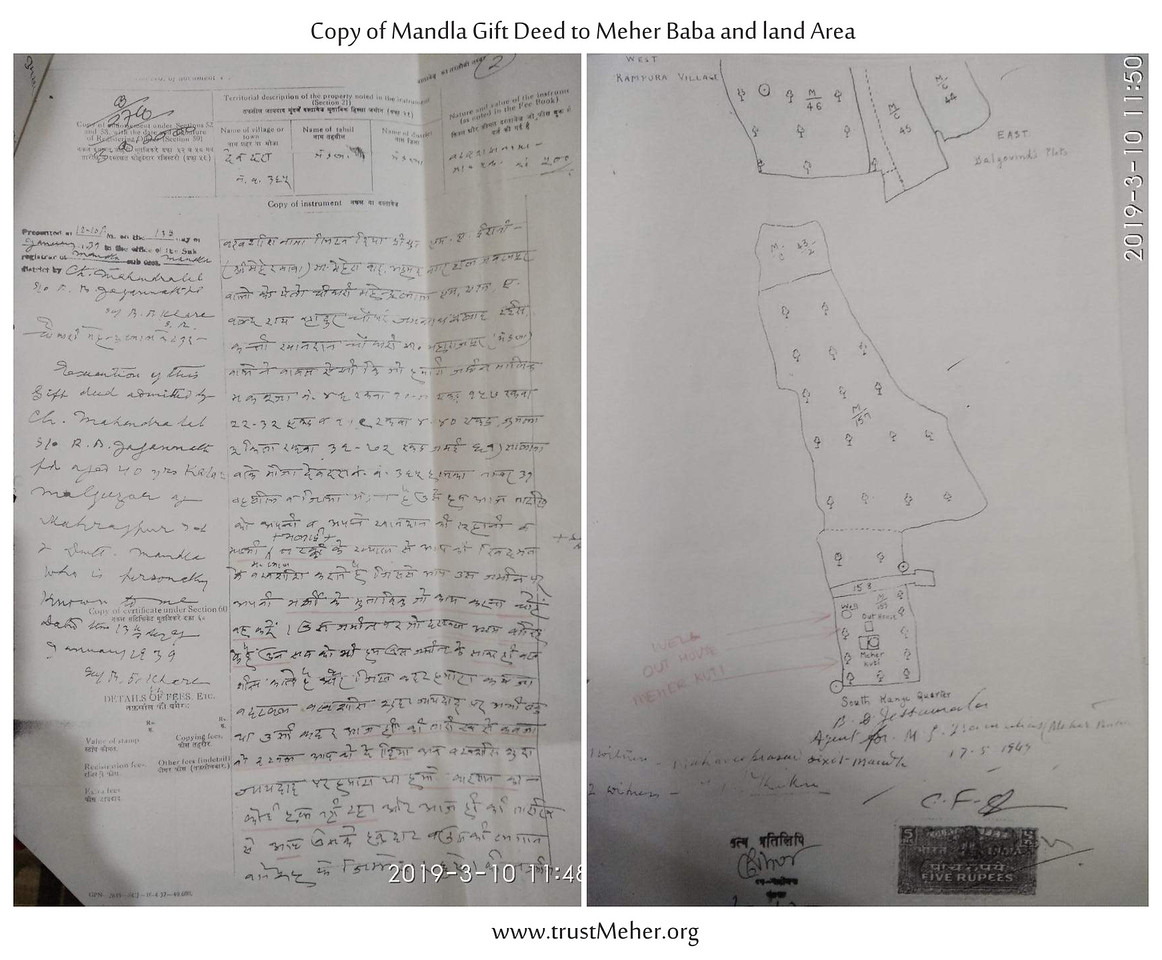 [Copy of Gift Deed and Land are of Meher Kuti Mandla]

[Chamber for meditation was also created inside the Structure] 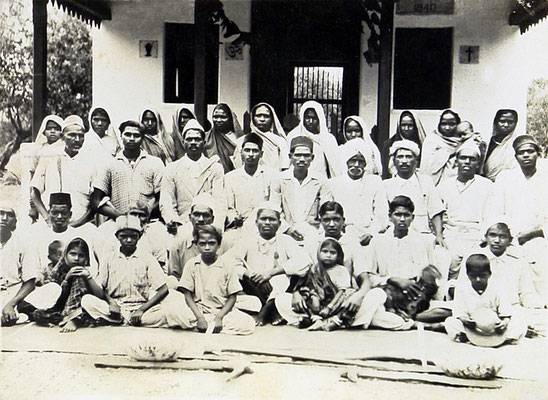