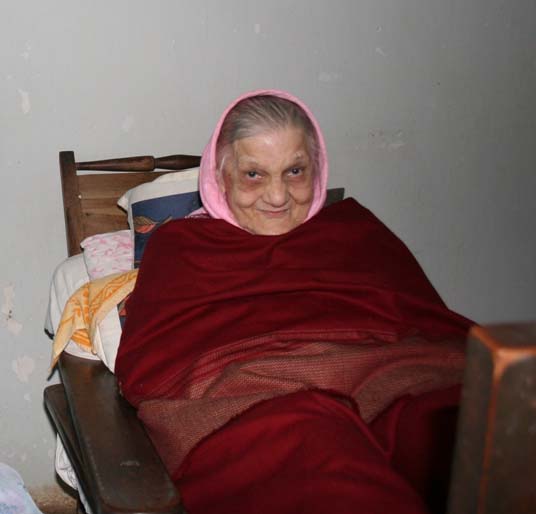 Jaloo Kaikobad Dastur passed away on 1st March 2012, at 2:20 in the afternoon in her room on Meherabad Hill after a brief illness. She was 83 years old.

Her longtime friend and caretaker Janaki along with medical staff and faithful servants were with Jaloo when she went to Beloved Baba.

Jaloo had come to live in Baba’s ashram in July 1944, when her father, Kaikobad, one of Baba’s close disciples, brought his wife and three daughters to Meherabad at Baba’s order.

Jaloo, her mother Jerbai, and sisters Meheru and Guloo, lived on Meherabad Hill ever since. For most of their life there, the family occupied rooms in a building that had been previously used by Baba for the maternity hospital, masts, the mad, and the Meher Baba’s Journal’s office. Right next to their living quarters was and still is Baba’s Cage Room, used by Him for intense seclusion and mast work. The family was allowed to stay there at upper Meherabad even when Baba left for the New Life in 1949.

Many pilgrims from the 1970s onwards remember Jaloo’s sweet, childlike, humorous and most appealing nature. Walking on the Hill in the evening with her sister Guloo, or having visitors in her room the last few years after Guloo went to Baba, Jaloo was a delight to meet and talk with. Her simple devotion to Baba was unique and absolutely wholehearted. And what a deeply special soul Jaloo must have been to spend almost all her life just a few yards away from the Avatar’s Samadhi!

On 1st March evening while her body was laid on the funeral pyre, Jaloo’s face was strikingly beautiful, radiating peace and joy, leaving no doubt that she had found her final resting place in the arms of her Beloved Master, Meher Baba.