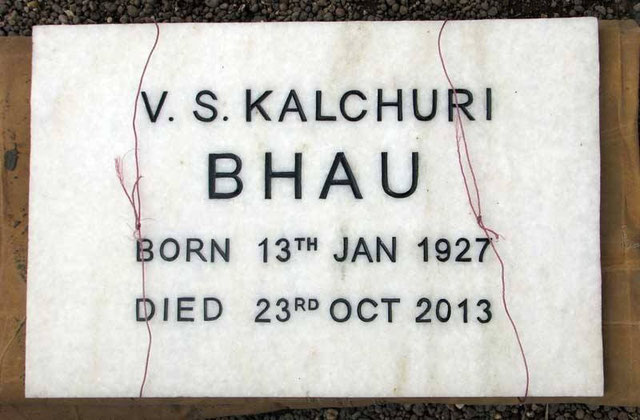 Avatar Meher Baba’s dearest Bhau, Baba’s intimate mandali member and the Chairman of His Trust, passed into Beloved Baba’s embrace on Wednesday, 23rd October 2013, at 11:17 p.m., faithful in love and service to his Master till the end. Bhau went to Baba in the Jehangir Hospital ICU in Pune, attended by his wife Rama, children Sheela and Mehernath, and very close family. He was 87 years old, and passed away due to a long illness complicated by recurrent infections. Bhauji’s family, and all at Meherazad, Meherabad and Meher Nazar join Baba lovers around the world in a united tribute to dearest Bhauji’s unforgettable life. He was the last remaining member of Baba’s Meherazad resident mandali, the Chairman of the Avatar Meher Baba Trust, and the author of numerous literary works about Meher Baba, including the twenty-volume biography Lord Meher, written at Baba’s order. Named Vir Singh Kalchuri and nicknamed “Bhau” (“brother” in Hindi) by Baba, Bhauji joined Baba in 1953 after receiving master degrees in Law, Chemistry and Agriculture. For many years he served as one of Baba’s night watchmen and it was during the hours of night watch that Baba first expressed His wish that Bhau begin writing poem-songs in Hindi, and later books and plays, for Baba’s pleasure.

After Baba dropped His body, Bhauji’s unique background in Law and Public Administration proved to be invaluable, from the early days of the Trust’s activities when Bhau became a trustee, through the past 17 years when he served as Chairman. Whether working day and night to solve a Trust difficulty, answering a pilgrim’s question, resolving a resident’s dilemma, or touring the Baba world in response to invitations from Baba centres in India and abroad, Bhauji gave extraordinary service to Baba through many different aspects. Even during his last illnesses, despite great discomfort Bhauji made efforts to give visitors his personal attention, loving wisdom and lively sessions of witty humour and song, as well as continuing his Sunday online “Chat” which was looked forward to and enjoyed by Baba-lovers around the world. Bhauji’s achievements for Baba’s Cause were legion. But like the men mandali who went before him, Bhauji will be remembered and honoured by posterity above all because of his loving, wholehearted, life-long surrender at the Feet of the Avatar of the Age, Beloved Meher Baba.