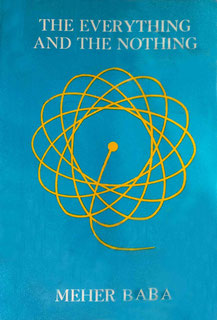 This little book carries 65 of Meher Baba’s messages from the early 60s. The East West Gathering, where thousands of Eastern and Western lovers were brought together in one massive darshan is detailed. “These Discourses were given…to His disciples by one who needs no introduction because He is the Self of every self and has His home in every heart; but because we have forgotten this He has reintroduced Himself to men as the Ancient One who is before all things were and will be after all things have ceased to exist…

The Discourses in this book—dictated in silence by Meher Baba through hand signs—may be said to be indications of the One Word of Truth that He will utter when He breaks His Silence and manifests his Godhood to men. The Everything and The Nothing constitutes a preparation of mind and heart to receive that One Word of Truth when He speaks it.”